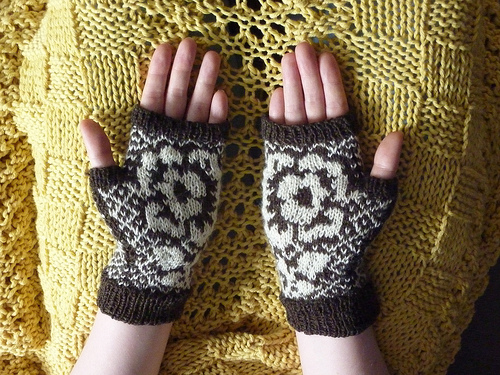 The final, PDF version of this pattern is now available as a free Ravelry Download:

download now
When I first saw Eunny Jang’s Endpaper Mitts and the way that the stranded pattern resembled the endpapers of a book, I recalled the first time I read Proust’s In Search of Lost Time in English as a freshman in college, which inspired me to become a literature major and also to learn French. We read the Modern Library hardcover edition, which had the most wonderful endpaper pattern, diagonal shapes in off-white and a greenish brown. So I thought, why not make gloves that would always remind me of one of my favorite books? And what would an old book be without a flower pressed inside? That was how they became the Pressed Flower Mitts. Aside from the flower itself, which I adapted from a discarded Vouge sweater project, these fingerless gloves differ from Eunny’s wonderful design in that they’re a few inches shorter (I tend to like my gloves either at the wrist or super-long), and the endpaper pattern is more simple. This makes it even more exciting when you open your palms to reveal the outlines of the flower.Yarn:
Spud & Chloë Fine Sock Yarn Color 7803 Dachshund (MC) and 7800 Popcorn (CC)
Yardage: 1 65g skein, 248 yards of each color
Source: Purl Soho (www.purlsoho.com)
NOTES: I’ve also knitted this pattern with Koigu KPM with great results, though Spud & Chloe has the advantages of being a bit lighter since it’s a silk/wool blend and also has great yardage so one skein of each color should be enough to make two pairs of gloves.Gauge:
Small: 32 sts/40 rows to 4″ of Endpaper Pattern
Medium: 30 sts/40 rows to 4″ of Endpaper Pattern
Large: 28 sts/36 rows to 4″ of Endpaper Pattern

First, it’s good to familiarize yourself with the Endpaper Pattern, which is a repeating pattern in the round that serves as the main pattern for the back of the hand, and the background pattern for the palm. This is what it looks like in both charted form and in written instructions:

Second, this pattern will require you to catch long floats in your colorwork. For any part of the pattern that requires more than five stitches in one color, catch the unused yarn so that you don’t end up with long loops in the back of your knitting where your fingers can snag. Methods of float catching vary depending on your knitting method, but here is a tutorial from Nicole Hindes for the most common, with the main yarn on the right hand and the contrast yarn on the left:

And now for the actual instructions:

CO 52 stitches in MC onto a single needle using the Italian Tubular Cast-on or your preferred method. Here’s a tutorial on the Italian Cast-on from FluffBuff:
http://www.fluffbuff.com/2006/07/tubular_caston_without_the_was_1.html

Distribute stitches evenly onto 4 smaller DPN’s, 13 stitches to each needle. If you’re uncomfortable purling to begin a row in DPN’s, you can divide 12 stitches, then 14, then 12, then 14. Join, taking care not to twist yarn.

Next round, *k1, p1, repeat from * to end of round.
Continue working in k1, p1 rib for 11 more rounds. Attach CC and change to larger needles. To more easily see the flower pattern, I suggest dividing the first 26 stitches onto two needles, and then the second 26 onto a single needle.

Begin colorwork. This chart shows entire colorwork pattern for the right mitt, indicating the point where you will have to put 19 stitches on a holder for the thumb. Completely dark areas (as opposed to the gray of the MC yarn) indicate blank areas with no stitches). Note that there is a purl in MC at the halfway point and at the end of each row, which creates a false seam that makes the pattern look neater. You will also have to do m1’s as indicated in the chart to increase for the Thumb Gusset. 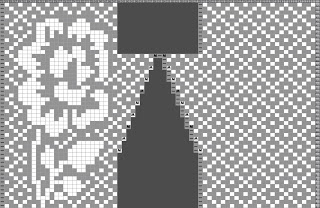 After finishing the chart, break off CC and switch to smaller needles.

Use Kitchener or Tubular method to bind-off stitches. An excellent tutorial can be found here:
http://www.savannahchik.com/2006/11/tubular_bindoff.htm

Thumb Ribbing:
Divide held stitches onto two needles.
Rib preparation row:
Using MC and starting with the stitch after the purl stitch (the 11th stitch), k9 and pick up 3 stitches evenly across gap, then k9 and p1 (22 stitches)

Use Kitchener or Tubular method to bind-off stitches.

Follow all instructions for right mitt except use the chart below for colorwork. The two mitts are identical except that the Endpaper Pattern side and the Flower Pattern side are reversed for the left glove, and the flower itself is mirrored. 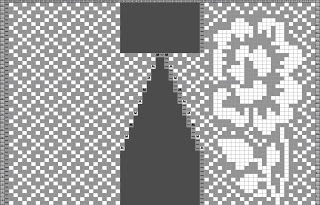 Weave in all ends and block to desired shape and size. Don’t worry if they seem too tight prior to blocking; the yarn relaxes nicely and becomes much softer and lighter after blocking.

Voila ma chérie! You have yourself a pair of Pressed Flower Mitts