Will the fun ever end you are surely asking yourself because, yes that’s right, it’s part 4 of our knitting tattoos marathon. It makes a change from the usual knitting pattern posts and on top of that it’s always nice to see how neat (or nutty!) peoples tattoos are. So far some of those we’ve highlighted have been discrete and tasteful, others big and bold, and occasionally one or two that are better best forgotten! Without further ado let’s take a look at the latest lot: 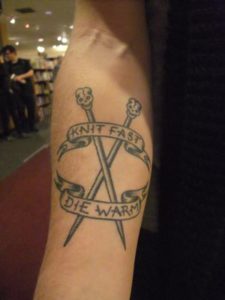 This ‘knit fast die warm’ tattoo adds has a touch of humor about it. I quite like that it’s not super colorful as that might be a bit ‘too much’. As it is though, I quite like it. 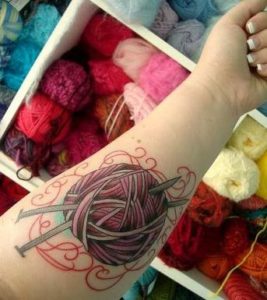 This ball of wool with knitting needles tattoo certainly has a dash of color to it. It’s quite big too but I’m not sure that it’s all that well suited for a forearm.  What do you think? 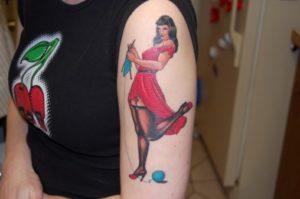 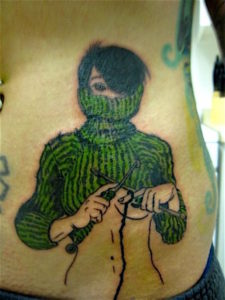 Along similar lines  of the one above, though this tat is slightly on the racy side. Overt your eyes people! As a side not, if I knitted a top while I was wearing it I’m pretty sure I’d never get out of the thing! 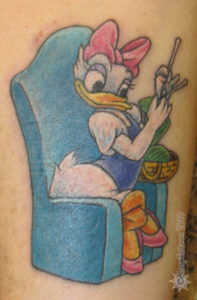 Daisy Duck reveals herself to be a fan of knitting in this cute looking cartoon inspired tattoo. She’s looking rather pleased with herself too! 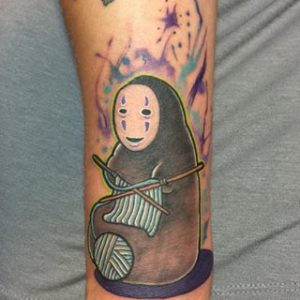 Last but not least, we have another ‘No Face’ tattoo (one was featured in tattoos part 3). This one looks more cute and cuddly than the last and I love the background of it too. One of my favorites!