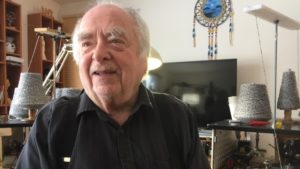 How’s that for a title? I thought I’d take a break from patterns for a change, in order to bring you a heartwarming knitting related story. This one is something special. An almost 90 year old Saskatoon man named Bob Rutherford has knitted a staggering 10,000 pairs of socks for shelters across Canada. To add a twist to this altruistic tale Bob knitted these socks using a machine, and not just any machine, no, his very own homemade knitting machine!

88 year old Bob used none other than sewer tubing to create two knitting machines which he says may well be knitting at a dizzying rate of 90 stitches per second. Bob’s sock making began seven years ago after his wife died. Instead of letting his life shrink, he put himself to work on this whacky creation which has now brought a lot of joy (and socks!) into the lives of people all over Canada. 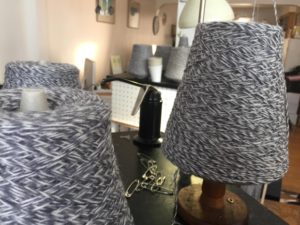 Bob’s friends are also getting in on the act by helping him. Sock stalwarts Glynn Sully, 92, and George Slater, 85, love helping out as does the somewhat more youthful Barney Sullivan. “He’s a really young guy, 65 maybe,” says Rutherford.

Rutherford’s son Scott helps raise money for the wool and Custom Woolen Mills near Calgary donates hundres of kilograms of wool, so the whole community plays a part in this heart warming enterprise.

Bob has his own philosophy on the sock making shenanigans.

“There’s a lot of us, as we grow older, we sit at home and look at the wall with nothing to do.

“And Socks by Bob has given me that something to do,” said Rutherford.